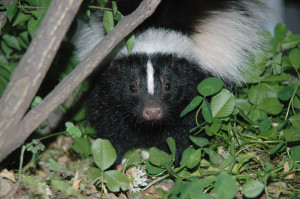 Skunk removal, trapping and control in the Charlottesville VA and Central Virginia areas is one of our specialties. It’s hard to believe, but Charlottesville seems to have one of the biggest skunk problems in Virginia. Skunks not only spread there horribly offensive odors into our homes, but they are also known to spray our pets. To effectively remove and manage skunk problems it is necessary to have a thorough understanding of skunk behavior and biology. Did you know that skunks in Charlottesville VA are one of the top rabies carriers? Did you know that we trap and remove more skunks in Charlottesville than any other location in our service area? Did you know that skunks don’t stink by nature, they are actually very clean animals. That unpleasant skunk smell we are all familiar with occurs when skunks spray when they are defending themselves. They also sometimes spray when defecating, when startled, and while mating. When a skunk dies their skunk essence sack with rupture and release that horrible skunk smell as their body breaks down during the decaying process.

Skunks are mostly nocturnal, and forage at night for a variety of foods. They are omnivores, eating both plant and animal matter, but really seem to prefer insects. They sleep during the day, usually in underground dens often dug by other animals. They do not fully hibernate, but activity is very low during the winter. The often communicate via scent marking, and males will often discharge their scent during the mating season. Skunks are well-known for their defensive tactic – when threatened, they will arch their back, lift the tail, and discharge a highly odiferous liquid from special glands near the anus. This sulphurous compound is not only offensive to the nose, but it can cause temporary blindness to an attacker. Many animals avoid skunks due to this defensive tactic. Birds like hawks and owls prey on skunks, since these birds lack a sense of smell.

The Striped Skunk (Mephitis mephitis) weighs from 4-10 pounds and is 24-30 inches long. Skunks are easy to recognize with their distinct black and white coloring. The Striped Skunk has two white bands that run from the head and down each side of the back. They do not form long partnerships, and mate in late February, and young are born in May. A litter may be five or six young. They follow the mother around, and after they are a year old, they depart to live on their own. Most die during their first winter. In Charlottesville, they usually only live 2-4 years in the wild, but can live more than a dozen years in captivity.

There are other skunk species as well, such as the Eastern Spotted Skunk (Spilogale putorius) which is smaller but similar in behavior. These skunks will actually perform a handstand when spraying. Note: Spotted Skunks are a Protected Species in Virginia. It is illegal to kill them.

If you have a skunk problem your best bet is have a professional Wildlife Removal Company trap the skunks and remove them from your property. You never want to kill a skunk on your property because they almost always spray. Also, there is no skunk repellent spray, powder, or device that’ll keep skunks away.

Skunks are often drawn to live under decks, porches, garages, sheds and trailers. The best way to keep skunks out is to have a Wildlife Removal Professional install a skunk exclusion barrier around the perimeter of the deck or other location you are trying to protect, so that they can’t crawl underneath the location. Also, it’s a good idea not to leave pet food, or any other food that will attract skunks out for them to opportunistically feed on.

How Do I Get Rid of a Skunk Smell?

If you or your pet (usually a dog) is sprayed by a skunk, don’t bother with the old tomato juice bath. It doesn’t help. The best way to get rid of the smell is to combine hydrogen peroxide, baking soda, and Dawn liquid dish soap. Immediately shampoo the dog (or person) with this mixture. If sprayed in the eyes, flush the eyes with water for approximately 15 minutes and seek medical attention if needed.

One of the largest concerns to homeowners in Charlottesville and Central Virginia is a skunk’s odor. Skunks frequently inhabit human dwellings. They’ll live under sheds, under porches, under garages, under decks, and under trailers. They may discharge or scent mark these areas, creating an unpleasant odor. Many people don’t like skunks on the property, because of fear of stumbling across one and getting sprayed. There’s also the matter of pet/skunk conflict. Skunks often fall down basement window wells as well. In addition, they can actually do a lot of digging, and damage to a lawn.

Skunks in the Charlottesville and Central Virginia areas can be a serious problem for homeowners. They are usually classified as a nuisance pest because of their digging, odor and high rabies vector species. The most common complaints we receive in Charlottesville include the following:

For these reasons, many people wish to have this nuisance animal trapped and removed. However, professional wildlife removal companies must be extremely careful to avoid being sprayed themselves.

Skunks in Charlottesville and Central Virginia are frequent carriers of rabies.

How Do I Get Rid of Skunks?

The best method is to hire a Charlottesville Wildlife Removal Professional to trap and remove the skunks from the area. Skunk trapping can be tricky, due to the animal’s ability to spray. Some trappers use solid-walled traps for this reason.

Are There Any Effective Skunk Repellents?

There is no registered or effective skunk repellent available. You can find some products on the market, such as mothball-based or urine-based repellents, but they are ineffective and a waste of money. If you don’t believe us, give them a try. And those high-pitch noisemakers, also called ultrasonic sound emitters, do not work. There is no quick and easy fix when it comes to skunk removal and control in the Charlottesville and Central Virginia areas. You can try various tactics to keep skunks away, but it’s best to have a wildlife professional trap and remove the animals properly.

Frequent Questions About Skunks Include

For answers to these questions, and for stress free skunk removal, skunk trapping, skunk control, skunk capture and skunk management in the Charlottesville VA and Central Virginia area give us a call at (434) 260-7077. We also provide skunk odor removal and control.