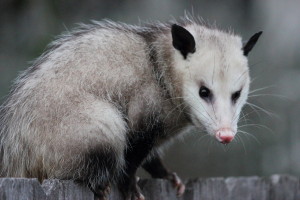 Opossum Removal in the Charlottesville and Central Virginia areas requires a keen understanding of possums, their behaviors and biology.

Possums (Didelphis virginiana) look somewhat like giant rats, with their pointed snouts and skinny, naked tails. They are in fact North America’s only marsupial (like kangaroos, they raise their young in a pouch). Adults average 10-14 lbs. They don’t live very long, rarely more than two years, three years max. They mate in January, and then the tiny young climb into the pouch and grow, then cling to the mother’s back, then drop off and lead a life on their own. Opossums are omnivores, which means that they eat anything. They are nocturnal. They have the most teeth of any mammal (50), a prehensile tail, opposable thumbs, the male has a bifurcated penis, and they have incredible immune systems.

Possums are nomadic and opportunistic animals. They sometimes establish a home base, especially a female with young, and often live in human structures in Charlottesville VA. They rummage around at night for food, and will eat pretty much anything, but prefer meat, and even rotting carcasses. They are not very fast, and will stand their ground when threatened, bearing their 50 sharp teeth. In dire circumstances, they will sometimes feign death, or “play possum” – they fall over, tongue hanging out, etc. It may be more an act of passing out from sheet terror as opposed to a grand act. Opossums can, if they wish, hang from their tails, but they very rarely do.

Because they are opportunistic scavengers, they can come into conflict with people in Charlottesville VA and cause various problems. They’ll steal garbage, pet food, etc. They can distress pets, and if a dog corners one, it can get a nasty bite. They can spread fleas and other parasites. Most of all, they often like to live in human structures in Charlottesville and Central Virginia, such as under sheds or decks, and they very commonly live inside of attics. When an opossum lives in an attic, it makes the attic its personal toilet, and leave a lot of droppings. They can also cause destruction in houses and attics. In addition, possums very frequently die inside buildings, inside the attic or walls, in crawl spaces and the smell of a rotting opossum body is horrific.

Opossums in Central Virginia usually don’t carry rabies. They have a lower than average body temperature, and the virus doesn’t survive well. They do carry a large amount of parasites, however, and thus are vectors for the diseases that fleas, ticks, etc can transmit. They also leave a lot of droppings, which pose the usual excrement health risks, such as leptospirosis or Salmonella.

Possums are very common in the urban areas of Charlottesville and Central Virginia, more common, in fact, than in wild areas. They are often nomadic, so sometimes they’ll just wander about from place to place. But they do oftentimes choose to live in one place for a long time, and they especially seem to like man-made structures. I often find opossums in the house, and as stated, I very commonly find them in attics. They seem to really like living in the walls of homes, and they often live under houses, where they can climb up the walls or the hole under the bathtub outlet. I’ve also seen possum in the basement. They love sheds, decks, or any small area they can climb under. They frequently get under mobile homes or trailer homes.

A. Any mammal can get rabies. However, the chance of rabies in an opossum is EXTREMELY RARE. This may have something to do with the opossum’s low body temperature (94-97º F) making it difficult for the virus to survive in an opossum’s body.

A. Opossums are generally nocturnal, foraging throughout the night. But it is not at all unusual to see an opossum out during the daytime, especially during cold weather. They also can be seen in the day when food is scarce or when they have been disturbed from their sleeping quarters.

Q. What do possums eat?

A. Opossums are not picky eaters and will consume almost anything, including table scraps and carrion (dead animals). They do seem to have a particular fondness for cat food, however, especially the tinned varieties. Their normal diet consists of carrion (dead animals), rodents, insects, frogs, and plants including fruits and grains.

A. Opossums are not dangerous as long as they are not cornered and their interaction with other animals and humans is kept to a minimum. They are beneficial to eliminate rodents, snakes, insects and carrion, and they provide a VITAL “grounds-keeping” function in most urban environments.

A. A opossum will use its 50 pointy teeth to defend itself if necessary.

Q. How many babies do possums have?

A. Generally opossums give birth to between 6 – 25 young, one to three times a year, usually between January and July. Most litters consist of 6 to 9 young. 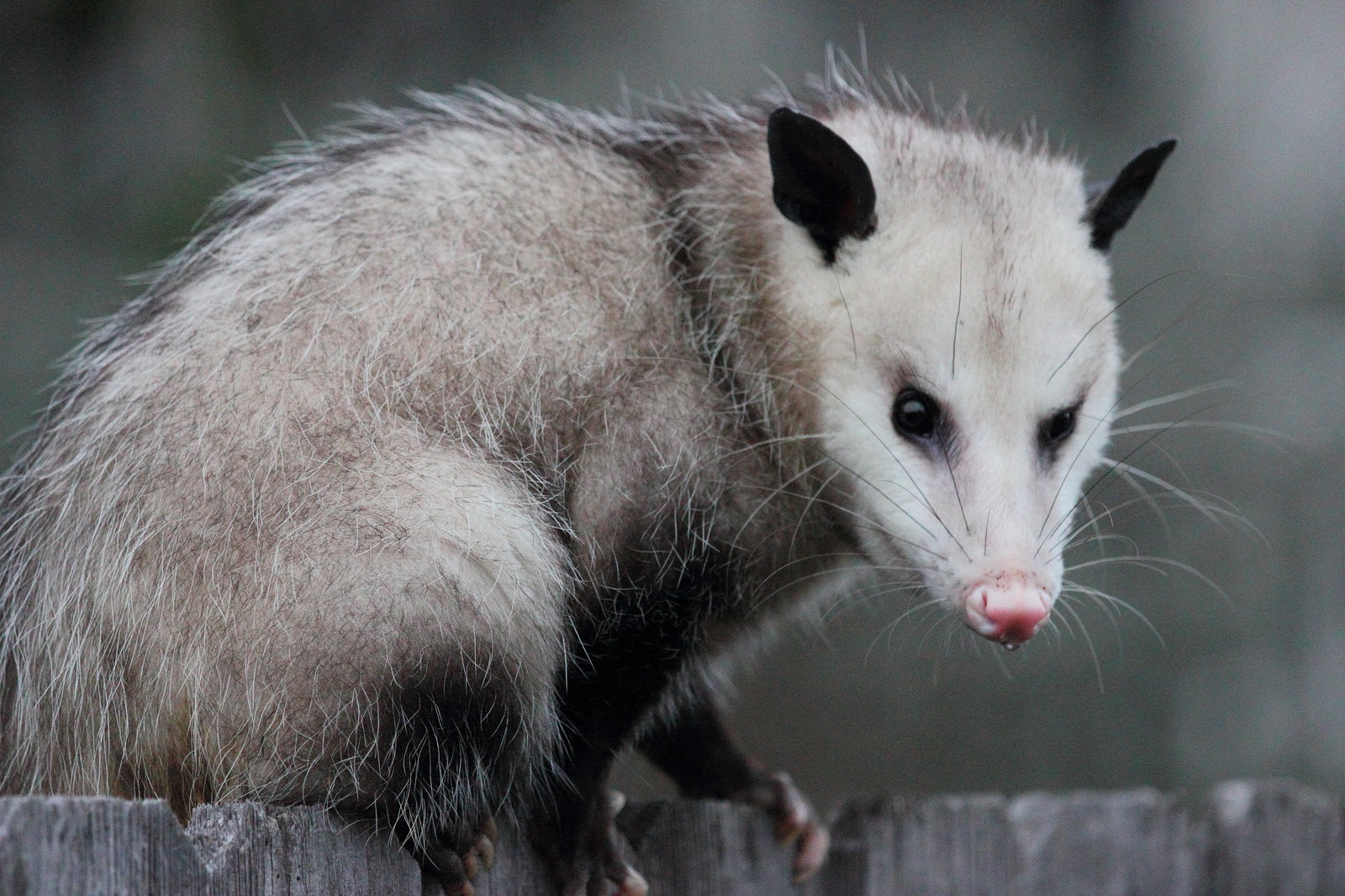