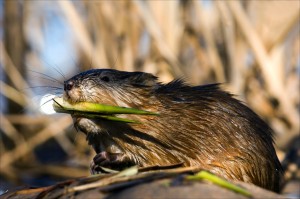 Muskrat Removal. People Often Ask Us How to Get Rid of Muskrats. Muskrats are semi-aquatic rodents. They spend their entire lives near a water source and can be found by nearly any dam, river, stream, pond, or lake in Charlottesville Virginia. They grow up to two feet long and are considered a medium sized rodent. In other words, they are bigger than voles and nutria, but smaller than beavers. Muskrats are mainly nocturnal critters which mean that you will only see the damage they leave behind and will rarely see the muskrat itself. Muskrats dig burrows into the sides of water banks and dams. They eat a strict vegetarian diet made up of aquatic plants and grasses. There living arrangements and their eating habits is what make them such a nuisance.

Muskrats in Charlottesville VA are universally seen as pests. In other words, no one really wants them around. Muskrats live near water banks and dig deep burrows which can really cause a dangerous situation for the muskrat and the people that go to the water. The burrows can cause the sides of banks or levees to collapse and if they happen to make their home in the side of a dam, they can really disrupt the water flow. This can cause a dam to collapse or flood certain places that are not supposed to be receiving water. This can also displace other species that are living in that particular ecosystem. Muskrats can also do considerable amounts of damage to your lawn and garden because they eat plants and vegetation exclusively, so when their food sources dwindle near their burrow, they will invade your garden at night eating all of your fruits, vegetables, flowers and herbs. This is a really big problem for people who grow show gardens or relying on their gardens for food. If you have a muskrat problem, your best solution is to hire a local Charlottesville VA Animal Removal Company. To get rid of a muskrat in the pond, trapping and removal is the most effective method. Muskrats can be trapped in live traps, but there is some degree of difficulty with this due to the lack of time muskrats spend on dry land.

The Most Common Muskrat Questions Include: