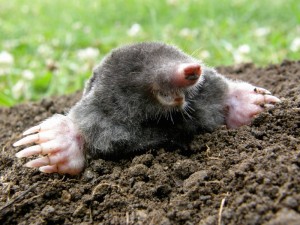 Mole and vole removal in Charlottesville VA is one of our specialties.

There are several different species of moles (animals) that damage are yards. The Eastern mole is the most common type of mole we see digging in the lawns of Charlottesville Virginia homes. Their raised tunnels create a mess and in a very short period of time moles can turn your beautiful lawn into an expensive restoration nightmare.

A mole’s diet primarily consists of earthworms and other small invertebrates found in the soil, and a variety of nuts. The mole runs (tunnels) are in reality ‘worm traps’, the mole sensing when a worm falls into the tunnel and quickly running along to kill and eat it. Because their saliva contains a powerful that can paralyze earthworms, moles are able to store their still-living prey for later consumption. They construct special underground “larders” for just this purpose; researchers have discovered such larders with over a thousand earthworms in them. Before eating earthworms, moles pull them between their squeezed paws to force the collected earth and dirt out of the worm’s gut.

Breeding season for moles in Charlottesville VA is generally February through May. Males search for females by letting out high-pitched squeals and tunneling through foreign areas. The gestation period of the Eastern mole (Scalopus aquaticus) is approximately 42 days. Three to five young are born, mainly in March and early April. Pups leave the nest 30–45 days after birth to find territories of their own. Moles are solitary creatures, coming together only to mate. Territories may overlap, but moles avoid each other and males may fight fiercely if they meet.

Moles are considered pests by most homeowners in Charlottesville Virginia. Moles burrowing and tunneling kills lawns. They can undermine plant roots, indirectly causing damage or death. Moles do not eat plant roots. Other animals such as voles may use mole tunnels to gain access to enclosed areas or plant roots. When the tunnels are near the surface, they collapse when the ground is soft after heavy rain and leave unsightly furrows in the lawn.

Voles are small rodents that grow to 3–9 inches (7.6–22.9 cm), depending on the species. They can have five to 10 litters per year. Gestation lasts for three weeks and the young voles reach maturity in a month. As a result of their accelerated reproduction rate, vole populations can grow very large within a very short period of time. Since litters average five to 10 young, a single vole can birth a hundred more voles in a year.

Voles resemble outwardly several other small animals. Many animals such as moles, gophers, mice, rats and shrews have characteristics and behaviors similar to voles. Voles commonly use burrows and tunnels with many exit holes, and therefore can easily be mistaken for gophers or some kind of ground squirrel or mole.]

Voles thrive on small plants yet, like shrews, they will eat dead animals and, like mice or rats, they can live on almost any nut or fruit. Additionally, voles will target plants more than most other small animals, making their presence evident. Voles will readily girdle small trees and ground cover much like a porcupine does. This girdling can easily kill young plants and is not healthy for trees or other shrubs.

Voles will often eat succulent root systems and will burrow under plants or ground cover and eat away until the plant is dead. The bulbs of plant in the ground are another favorite target for voles; their excellent burrowing and tunneling skills give them access to sensitive areas without clear or early warning. The presence of large numbers of voles is often only identifiable after they have destroyed a number of plants.

Many of the questions we receive from homeowners involving moles and voles include:

Contact our local Charlottesville Mole and Vole Removal experts at (434) 260-7077 for fast and effect mole and vole removal and control.