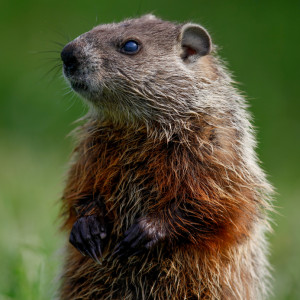 Groundhog removal in Charlottesville VA and Albemarle County Virginia is one of the most common calls we get at Virginia Professional Wildlife Removal Services. As any Virginia wildlife removal company can tell you, these animals can be very pesky and difficult to catch. They can cause a lot of damage as they go about eating grasses, shrubs and garden plants. Groundhogs are herbivores (which means they only eat plants). They can also cause damage to lawns, fields, pastures and flower beds as they dig their tunneling systems. They will completely destroy plants and are known to dig holes under decks, porches, garages, sheds, homes and out buildings. Groundhog digging and burrowing can be very dangerous as structural damage may occur as an animal digs under you shed or deck, causing the shed to either shift or fall.

Groundhogs are often mistaken for badgers or beavers, their body shape is similar, however they are very different animals. They are known by many names including groundhogs, woodchucks and whistle pigs. They are sometimes incorrectly identified as gophers or hedgehogs.

Do-it-yourselfers (DIY) can sometimes get rid of a groundhog under the shed by safely using a live catch, cage trap or a lethal body gripping trap. Because it may not be feasible to place the trap directly next to the burrow entrance, use planks of wood to help direct the animal down a singular route with the trap set in the path of travel.

The woodchuck (Marmota monax), a member of the squirrel family, is also known as the “ground hog” or “whistle pig.” It is closely related to other species of North American marmots. It is usually grizzled brownish gray, but white (albino) and black (melanistic) individuals can occasionally be found. The woodchuck’s compact, chunky body is supported by short strong legs. Its forefeet have long, curved claws that are well adapted for digging burrows. Its tail is short, well furred, and dark brown.

Both sexes are similar in appearance, but the male is slightly larger, weighing an average of 5 to 10 pounds (2.2 to 4.5 kg). The total length of the head and body averages 16 to 20 inches (40 to 51 cm). The tail is usually 4 to 7 inches (10 to 18 cm) long. Like other rodents, woodchucks have white or yellowish-white, chisel-like incisor teeth. Their eyes, ears, and nose are located toward the top of the head, which allows them to remain concealed in their burrows while they check for danger over the rim or edge. Although they are slow runners, woodchucks are alert and scurry quickly to their dens when they sense danger.

In general, woodchucks prefer open farmland and the surrounding wooded or brushy areas adjacent to open land. Burrows commonly are located in fields and pastures, along fence rows, stone walls, roadsides, and near building foundations or the bases of trees. Burrows are almost always found in or near open, grassy meadows or fields. Woodchuck burrows are distinguished by a large mound of excavated earth at the main entrance. The main opening is approximately 10 to 12 inches (25 to 30 cm) in diameter. There are two or more entrances to each burrow system. Some secondary entrances are dug from below the ground and do not have mounds of earth beside them. They are usually well hidden and sometimes difficult to locate. During spring, active burrows can be located by the freshly excavated earth at the main entrance. The burrow system serves as home to the woodchuck for mating, weaning young, hibernating in winter, and protection when threatened.

Some of the damage caused by groundhogs include the damage to shrubs, flowers and other grasses that are loved by homeowners, the groundhog is also responsible for damage to foundations of homes and buildings due to their excessive digging in or around a foundation of homes and buildings. They have also been know to cause thousands of dollars of damage to HVAC systems and duct work in crawlspaces of homes. Groundhog digging and burrowing around a home’s foundation can cause erosion from water runoff leading to foundation cracking, excessive home settling, and other structural damage to your home.

On occasion, the woodchuck’s feeding and burrowing habits conflict with human interests. Damage often occurs on farms, in home gardens, orchards, nurseries, around buildings, and sometimes around dikes. Damage to crops such as alfalfa, soybeans, beans, squash, and peas can be costly and extensive. Fruit trees and ornamental shrubs are damaged by woodchucks as they gnaw or claw woody vegetation. Gnawing on underground power cables has caused electrical outages. Damage to rubber hoses in vehicles, such as those used for vacuum and fuel lines, has also been documented. Mounds of earth from the excavated burrow systems and holes formed at burrow entrances present a hazard to farm equipment, horses, and riders. On occasion, burrowing can weaken dikes and foundations.

How To Get Rid of Groundhogs

Groundhogs can be one of the more elusive creatures that wildlife trappers and animal trappers try to control. Since groundhogs are herbivores and often have a plentiful supply of available food sources, selecting the right bait can be difficult. Groundhogs are generally not interested in food baits that are used to lure opossums, rats, mice, raccoons, squirrels, skunks and other wildlife. These animals require specialty baits that are similar to their natural food source. A groundhogs preferred food source often varies based upon its geographic location. In some parts of Virginia groundhogs can be trapped with baits such as cantaloupe, broccoli, peaches, and corn. In other areas of Virginia, groundhogs show little to no interest in these types of baits. Because of the difficulty involved in trapping and removing groundhogs it is often best to hire a professional Charlottesville Virginia Wildlife Removal Expert who specializes in groundhog removal and control. Virginia Wildlife Removal and Animal Pest Control companies will know the local area and have the proper traps and baits used to trap groundhogs in your local Charlottesville VA area. The longer it takes for the groundhog to be caught, the more damage the groundhog can cause. Just like the chances of a groundhog seeing its shadow  on Groundhog Day, so too are the chances of an inexperienced homeowner in successfully trapping and removing a nuisance groundhog in Charlottesville Virginia.

A. No. There are no groundhog repellents that have been scientifically proven to be effective.

A. There are no ground hog poisons that have been registered by the U.S. Government and approved to be used.

Q. What are the best groundhog removal techniques?

A. The best way to get rid of groundhogs is to have them professionally removed by a Charlottesville Groundhog Removal & Trapping Company like Virginia Professional Wildlife Removal Services. We are experts at groundhog removal and control in Charlottesville VA.

Q. How much does groundhog removal cost?

A. The cost for groundhog removal, trapping, control, trapping and management in Charlottesville Virginia varies depending on the complexity of the job, size of the problem area and population density of the groundhog problem. As an example, the cost to remove groundhogs from a 100 acre farm would cost more than if we were removing a single groundhog from beneath a shed.

Q. What is the best groundhog bait?

A. There is a lot of information on the internet explaining how to catch a groundhog. The truth is groundhogs can be difficult to catch and most will refuse to enter a standard cage trap. The groundhog baits and lures we use are those made for professional groundhog removal companies in Charlottesville Virginia.

Q. What groundhog removal services do you provide?

A. Our company provides safe and humane groundhog removal, groundhog trapping, groundhog control, groundhog capture, and groundhog management in Charlottesville VA. We also provide groundhog exclusion services to keep them from digging under your porch, garage, shed or deck.

Q. What is the most effective groundhog control?

A. Like most animals, habitat modification for groundhog control can be effective, but also difficult. The best way to get rid of groundhogs is to have them professionally removed by a Charlottesville Groundhog Removal & Trapping Company like Virginia Professional Wildlife Removal Services. We are experts at groundhog removal and control in Charlottesville VA. We can also provide suggestions for keeping them from burrowing under garages, decks, porches and sheds.

Q. What do groundhogs eat?

A. Groundhogs prefer to feed in the early morning and evening hours. They are strict herbivores and feed on a variety of vegetables, grasses, and legumes. Preferred foods include soybeans, beans, peas, carrot tops, alfalfa, clover, and grasses. They love eating flowers and plants from your yard or garden.

Q. What do woodchucks eat?

A. Woodchucks prefer to feed in the early morning and evening hours. They are strict herbivores and feed on a variety of vegetables, grasses, and legumes. Preferred foods include soybeans, beans, peas, carrot tops, alfalfa, clover, and grasses.

Q. How many babies does a groundhog have?

A. Groundhogs breed in March and April. A single litter of 2 to 6 (usually 4) young is produced each season after a gestation period of about 32 days. The young are born blind and hairless. They are weaned by late June or early July, and soon after strike out on their own. They frequently occupy abandoned dens or burrows. The numerous new burrows that appear during late summer are generally dug by older woodchucks. The life span of a woodchuck is about 3 to 6 years. Woodchucks usually range only 50 to 150 feet (15 to 30 m) from their den during the daytime. This distance may vary, however, during the mating season or based on the availability of food.

For safe, effective and humane groundhog removal in Charlottesville and Richmond Virginia contact one of our local Groundhog Removal Experts at Virginia Professional Wildlife Removal Services at (434) 260-7077.