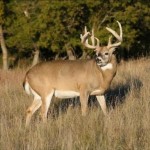 Deer are probably the most widely distributed and best-recognized large mammals in North America. The white-tailed deer (Odocoileus virginianus) is found throughout much of North America. The mule deer (O. hemionus)is primarily a western species restricted to buttes, draws, and stream bottoms with sufficient forage. The black-tailed deer (O.h. columbianus) is a subspecies of the mule deer. Both white-tailed and mule deer are very important game animals. In 1974 about 2 million white-tailed deer were harvested by over 8 million hunters. The trend in both harvest and hunter numbers has been generally upward since then. The positive economic value of deer through license fees, meat, and hunter expenditures for equipment, food, and transportation can be measured in hundreds of millions of dollars. Hesselton and Hesselton (1982) estimated the value of each deer harvested in the United States to be $1,250. With the additional aesthetic value of deer to landowners and vacationers, importance of deer as a wildlife resource cannot be disputed.

Despite their economic and aesthetic values, deer also have a variety of negative economic impacts as they damage crops and personal property, and harbor diseases common to humans and livestock. Unlike moles, rats, and other species implicated in damage, deer cannot be casually eliminated when in conflict with humans. But neither can landowners be expected to bear the entire burden of support for this valuable public resource.

Scare devices, repellents, and shooting all have a place in deer damage control. Effective control for fields, orchards, and other large areas, however, usually depends on excluding the deer with one of several types of fences, discussed later in this chapter. Toxicants, fumigants, and in most cases, trapping, are not used in deer control.

The volume of literature on deer ecology and management exceeds that for any other wildlife species. The best single reference is Halls (1984). The following review is meant as a brief summary using the white-tailed deer as an example. The mule deer is very similar in all respects.

Deer are creatures of the forest edge rather than the dense, old-growth forest. They thrive in agricultural areas interspersed with woodlots and riparian habitat. They favor early successional stages which keep brush and sapling browse within reach. Dense cover is used for winter shelter and protection.

Browse (leaves, stems, and buds of woody plants) is generally available all year and is a staple food for deer. An extensive review of food habits can be found in Hesselton and Hesselton (1982) and in Mackie et al. (1982). Plant species vary considerably in quality and regional availability, so a list is not presented here. Forbs are eaten in spring and summer when available. Fruits and nuts (especially acorns) are seasonally very important. Grasses are relatively unimportant. Agricultural crops–corn, soybeans, small grains, alfalfa, vegetables, and fruit trees–are readily eaten when available. Local food habits studies are available in most states–consult your local wildlife agency.

Nutrient requirements and the amount of food consumed vary with age of the animal, season, and the reproductive cycle. Daily dry matter consumption averages 2% to 4% of live body weight. For adult bucks, daily consumption is greatest in spring and averages 4.4 to 6.4 pounds (2.0 to 2.9 kg) of air-dry food per day. Consumption is about half that during winter. For does, greatest daily food consumption occurs in early fall, just prior to the breeding season.

Breeding occurs from October to January depending on latitude. Peak activity is in November. Does are in heat for 24 hours every 28 days for 2 to 3 consecutive cycles. One buck may inseminate several does. No pairing takes place. Most does breed during their second fall, although on good range up to 30% of the doe fawns (6 months old) will be bred. Gestation is about 202 days. The peak of fawn drop is in May or June. Most reproducing fawns give birth to a single fawn, but adult does typically bear twin fawns. Reproductive potential is very sensitive to nutrition. Fawns weigh 7 to 8 pounds (3.2 to 3.6 kg) at birth and increase in weight for 5 1/2 to 6 1/2 years. Adult size varies with latitude. In northern states, a mature buck may weigh 200 to 300 pounds (90 to 135 kg). A key deer buck (white-tailed deer subspecies) in Florida may weigh only 50 pounds (22.5 kg). Does average 25% to 40% less than bucks for all subspecies.

Deer are most active in early morning and evening. They have a home range of several hundred acres (ha), but this varies with season, sex, and habitat quality. In northern areas, deer gather in dense cover for the winter. They may move long distances from summer range to a winter yard. Life expectancy is dependent on hunting pressure and regulations. Records show whitetails living 20 years, although 10 to 12 years is noteworthy in the wild.

Deer damage a wide variety of row crops, forage crops, vegetables, fruit trees, nursery stock, and ornamentals, as well as stacked hay. In addition to the immediate loss of the crop being damaged, there is often residual damage in the form of future yield reduction of fruit trees or forage crops such as alfalfa. Ornamental trees or nursery stock may be permanently disfigured by deer browsing. Under high densities deer may severely impact native plant communities and impair regeneration of some forest tree species. Besides vegetative damage, deer/ vehicle collisions pose a serious risk to motorists, and deer have been implicated in the distribution and transmission of Lyme disease.

Damage identification is not difficult. Because both mule deer and white-tailed deer lack upper incisors, deer often leave a jagged or torn surface on twigs or stems that they browse. Rabbits and rodents, however, leave a clean-cut surface. In addition, deer tracks are very distinctive. The height of damage from the ground (up to 6 feet [1.8 m]) often rules out any mammal other than deer. Deer often are observed in the act of causing damage. (Source: ICWDM.org)