Bats in Attic / Bat in House / Bat in Chimney 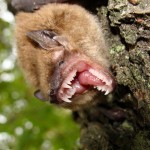 Charlottesville VA Bat Removal, bat control, bat management and bat exclusion in Charlottesville, Richmond and throughout other areas of Virginia is best left to certified bat removal experts who are trained in biology and behaviors of the various bat species in Virginia.

There has also been an occurrence of the Brazilian Free-tailed bat in southeastern Virginia.

Bat removal in Virginia is a process. The process involves an inspection (assessment of the situation), getting the bats out at the appropriate time using approved industry standards and techniques, doing seal-ups and repairs to keep bats out (bats can enter an opening as small as 3/8″), safely removing and disposing of the bat guano (bat poop can cause a lung disease called Histoplasmosis), and treating for bat bugs (if necessary).

Do you have bats in your attic? Our bat services include bat proofing (sealing current and potential bat entry points), cleaning up bat feces, disinfecting and deodorizing, and bat removal. For bat removal services in other areas in Virginia and throughout the United States visit Bats In The Attic.

Are you hearing scratching sounds? These may be from squirrels, raccoons, or rodents. Are there moles in your yard? Charlottesville Animal Damage Control has effective mole control and mole removal solutions. Whether you have squirrels or bats in the attic, moles in the yard, mice in the basement, or raccoons in the chimney, we can help! Charlottesville Animal Damage Control offers affordable solutions for all of your commercial and residential nuisance animal problems.